Trade publications really are having a good week on the story front this week.

Indeed, today legal publication The Lawyer landed a rather intriguing tale about how a British High Court judge has thrown into question the legitimacy of a £16 million bill charged to Eurasian Natural Resources Corporation by Decherts, the law firm that counts the former deputy prime minister's wife as a partner.

According to the piece in The Lawyer, Master Rowley decreed that ENRC, now called Eurasian Resources Group, can have Dechert’s £16m bill assessed and can pursue the lawyers for its costs.

The mining giant had accused Dechert - whose partners include Miriam Gonzalez, the wife of Nick Clegg, the Liberal Democrat MP and former deputy prime minister - of whipping up controversy in order to inflate its fees, saying that the lawyers were guilty of “systematic and gross overcharging".

The court case revealed that ENRC initially hired rival law firm DLA Piper to investigate a corruption allegation at one of its overseas sites for an estimated £350,000-£400,000. However, the lawyer leading the investigation, Neil Gerrard, subsequently moved to Dechert, taking the case with him. And then the fees then sky-rocketed.

Master Rowley reportedly described Dechert’s estimates as “considerably awry on every occasion” and also questioned Dechert’s attempt to have the costs hearing held in public.

For those of you that don't have access to the The Lawyer I have pasted the piece below: 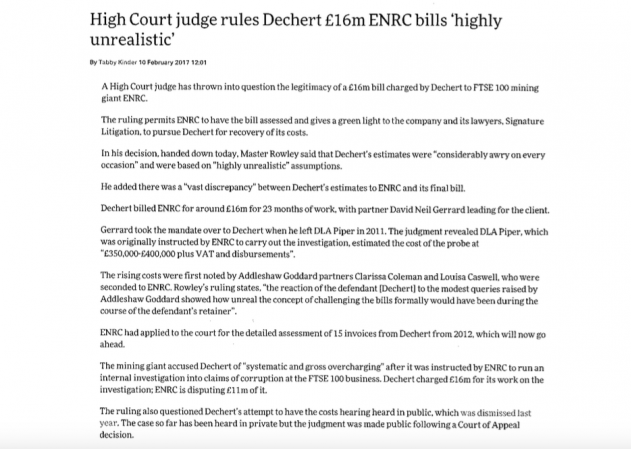 [Disclaimer - the information on Betaville does not consitute any form of investment recommendation and is not intended to be relied upon by readers in making, or refraining from, any investment decisions].